Hey, we’ve all been there.  You’ve got an amazing birding trip planned:  you’ve picked the perfect location, the time of year is ideal and the weather couldn’t be better.  You eagerly arrive at your location with checklist in hand, ready to tick off one bird after another, but as you start looking for birds, something isn’t right.  It’s dead quiet…not a bird to be heard, not a bird to be seen.  You walk around for a couple of hours like a zombie in disbelief and eventually convince yourself a bird of prey must have swept through the area only minutes before you arrived ruining everything, and so you shuffle back to your vehicle with your feathers ruffled.  It happens…

Welcome to the Ellis Bird Farm where you can make your next birding trip a SURE THING!

Showcasing a variety of nest box designs, some of which are occupied!

When we first arrived at the Ellis Bird farm the morning of June 14th there was a little nervous anticipation…would this be another one of those trips where you go out in search of a particular species and are faced with utter disappointment?  It was a two hour drive from Calgary to Lacombe in Central Alberta and we wanted to see a purple martin BADLY!  As we made our way around the picturesque walking path we felt a surge of joy as we found what we were seeking–The Colour Purple–in abundance!!!

They were EVERYWHERE!  On metal artwork… 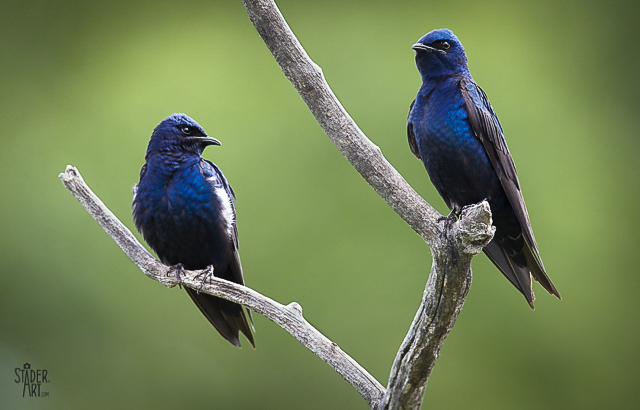 And in their houses…

Purple martins are the largest North American swallow.  Every spring they begin a staggering 7000+ km journey from their wintering grounds in Brazil to Central Alberta (as well as other areas in Canada and the USA), sometimes covering up to 600 km in a single day, to breed in colonies — usually man-made apartment houses specifically designed for these birds. The original colony residing at Ellis was completely wiped out in 1982 after a severe storm (tree encroachment also played role), but fortunately in 1999, under the mentorship of Del and Debra McKinnon with Purple Martin Conservancy, efforts were made to re-establish their foothold.  Ellis now boasts a population of approximately 104 nesting pairs that is slowly increasing every year despite the fact that these birds are in in over-all decline. Fingers crossed they can max-out their 113 available compartments next year!

The species suffered a severe population crash in the 20th century widely linked to the spread of European starlings in North America. Starlings and house sparrows compete with martins for nest sites and often push them out of an area, destroy eggs and kill nestlings.

Since 2012 Ellis Bird Farm has been participating in ground-breaking research using RFID (radio frequency identification) and geo-locator technology lead by scientist Dr. Kevin Fraser from the University of Manitoba. Their findings have profoundly helped our understanding of migration patterns and the challenges birds face–more information about this fascinating research and the story of Amelia, the first northern nesting martin to be tracked on her annual journey encompassing  21,000 km, from Ellis to Brazil and back, are available here.

Sub-adult males are often the hardest to identify, but will have at least one solid-purple feather either on their chins, throats, bellies, or undertails.  They do not get their full plumage until the 3rd calendar year.

The average life span of a purple martin is 1 – 5 years, with the oldest martin on record being a whopping 13 years and 9 months old!  The first adult martins (male and female) usually begin arriving at Ellis the third week of April.  Male and female pairs build the nest together using straw, twigs, pine needles, leaves, mud and feathers.  They typically lay one clutch consisting of two to seven dull white eggs on which the female will spend seventy five percent of her daylight hours incubating for 15 – 18 days.  Only females can incubate eggs because only they have a brood patch– a featherless area rich in blood vessels that transfers heat to the eggs.

Young martins remain in the nest for 26 to 35 days and can be fed up to 60 times per day by both parents.  After fledging they continue to return to the nest for the night until they begin their migration back to Brazil in August.  According to RFID and geo data, most purple martins leave Ellis Bird Farm by Aug 20th–so you still have time to plan a trip and catch the action! 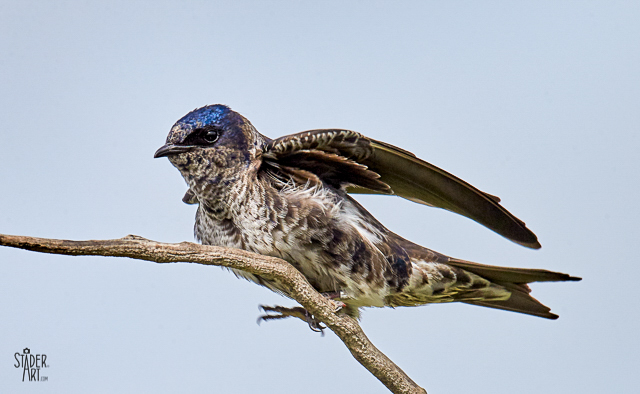 Adult females have purple on their head and back but do not have any purple feathers on  their chest, belly or undertail.

The Ellis Bird Farm is not only about purple martins.  There are plenty of other bird species that are so tame you can get a full-frame picture with your camera!

There are a large number of nesting swallows on the grounds and we couldn’t believe how calm they were. We began slowly creeping up on this tree swallow (trying to be stealthy) until we saw another guest walk right up and snap a pic 3 feet away…  Needless to stay we are not used to this approach, but it was rather liberating from the usual “tip toe through the tulips” strategy we usually employ.  Heck, it is one of the only places we know of where you could almost do “bird macro” photography:)

We were so focused on the purple martins and tree swallows it took a couple of minutes for us to realize a house wren was literally sitting on a bush a couple feet from our heads.  No wonder it sounded so loud!

The farm has a large population of cedar waxwings and this one literally landed in front of us.  Sure it wanted berries, but hey, we are opportunistic birders!

The Ellis Bird Farm has a long history with mountain bluebirds.  The founders of the farm, Charlie and Winnie Ellis, established bluebird trails along their property back in the 1950s.  By the 1990s, their farm supported the highest density of mountain bluebirds ever recorded at 105 paris! Unfortunately a horrendous snowstorm in 2008 devastated the population, reducing it to a mere 26 pairs, but Myrna Pearman (renowned author and operations manager at Ellis) said they are slowly making a come-back.  This year they had approximately 50 pairs and 2016 seems to be a banner year in most of Alberta.

There are some nature trails that you can walk that go beyond the central hub of activity near the visitor centre.  Some of the 350 nest boxes for mountain bluebirds are setup along these trails and we were fortunate to see a nesting pair. 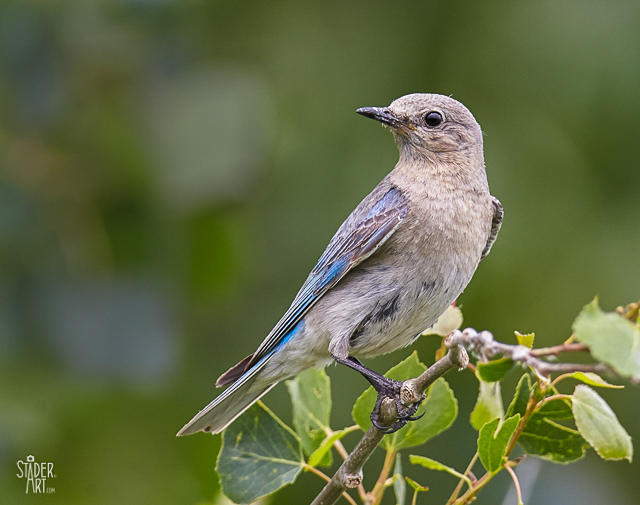 Activities the Entire Family Can Enjoy

It is not only the abundance of purple martins and other birds that makes the Ellis Bird Farm a “sure thing,” it is a unique venue that combines local history, nature and a wide variety of activates the entire family can enjoy from toddlers to grandma and grumps (yes, even the grumpy ones seem to like it)!

There is a petting zoo that appeals to kids of all ages, baby goats, chicks as well as a very popular dipping pier for hot summer days!  Ellis is special in that it tries to concentrate on “educational experiences for visitors as opposed to mere entertainment.”

For those seeking more solitude there there are walking paths, ponds, benches, flowers, butterflies and beautiful gardens developed by Cynthia Pohl.  The gardens are an amazing example of “NatureScape” gardens mentioned in Myrna’s NatureScape Alberta book and are probably one of the only public organic gardens in western Canada. 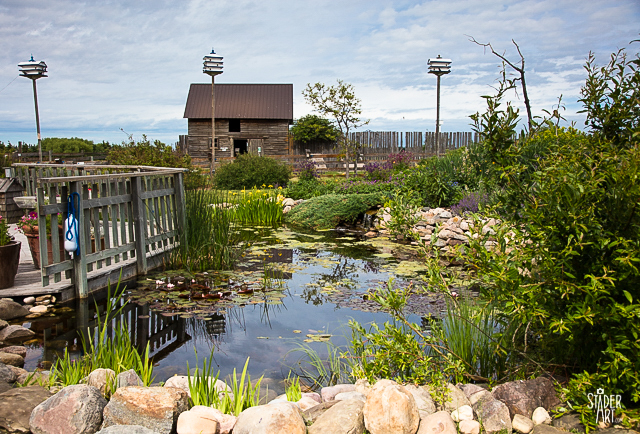 One of our favourite attractions that is sure to be a home-run hit with visitors is the Ellis Café.  This little gem features an open-air patio nestled in a garden amongst birds feeders, flowers and trees. It not only offers a cozy and intimate setting, but delicious food and drink under the master hand of chef Matt Burton–like the iced-chocolate mint green tea latte!  Move over Starbucks because this was so decadent we had two each–in fact, we have considered driving the 2 hours for lunch on more than one occasion (as if we need another excuse–but the food IS that good)!  It’s also fun to watch squirrels scamper about and hummers buzz nearby (they are not shy either and provide plenty of table-side entertainment)!

The Ellis Cafe uses locally sourced produce and makes everything from scratch! 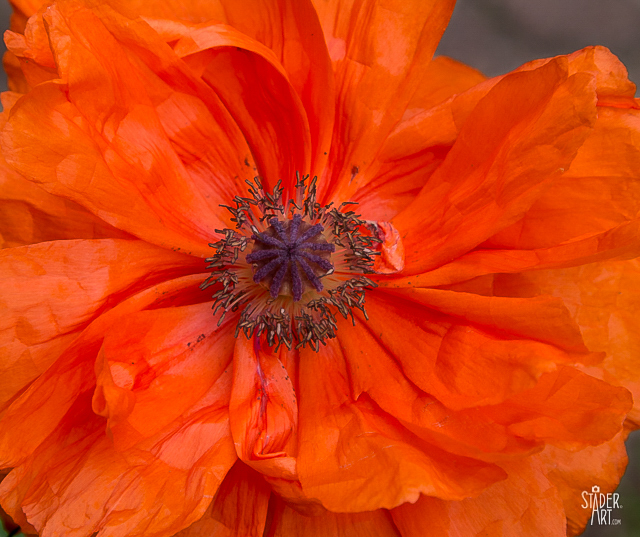 Flower near the cafe

The Ellis Bird Farm is a hidden oasis in the prairies and the perfect place to enjoy 2-8 hours of fun in the outdoors! It is a non-profit organization that runs solely on donations with a mandate based on conservation, education and scientific study. For bird lovers, if you have not picked up a copy of Myrna Pearman’s book on Backyard Bird Feeding, check it out–it is an outstanding resource and all the profits go to the Ellis Bird Farm–it’s a sure a thing!

For more information about the Ellis Bird Farm you can visit their website: www.ellisbirdfarm.ca.

A special thanks to Myrna Pearman for all the information she provided for this article.